From The Principal – Fortnightly updates

This term Ms Val Cousins is on leave. Her role is being filled by Mr Roy Moosa

This week as part of our safety protocols we will be holding an emergency drill (evacuation or lock down). Although it can be an inconvenient interruption, it is an important process to ensure that we are prepared for any circumstances.

On August 2, Ms Holsgrove took the boys team to represent the school at the Regional Championships. The boys tried hard and played some good football. In the end they won a couple of games and ended up third. It was a good outcome and the team displayed good sportsmanship and team work.

Last week the school held its Cross Country competition. The students ran well and tried their best. Well done all students who finished the grueling course.

This year we had 12 students selected to compete in the State Cross Country Championships. It is an extremely tough event and the students ran well and did their best. We had one runner finish in the top 50 for their age, which is a good outcome. 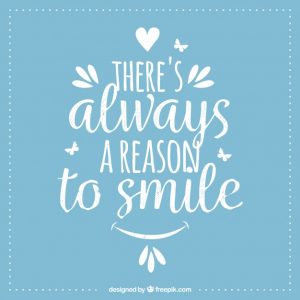 News from the Library 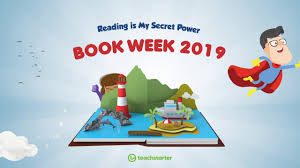 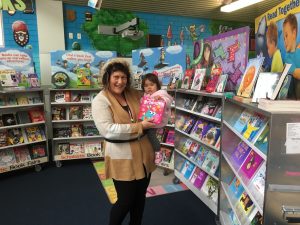 A big thank you to our Parent community for supporting another successful Scholastic Book Fair. I would like to thank Sue Burletson, Yvette Legge and our student Library monitors that gave up their precious time to support this event.  This year we sold approximately $5,500.00 worth of books which will credit our school with $2071.00 commission towards resources for our school.

The Best Excursion Ever!!

On 24 July 2019, Room 8 went on an excursion – it was brilliant! (William) We went the Apple Store at Garden City to make iMovies of the Dreamtime stories we wrote last term. My mum came to be a parent helper. First, we had recess but I was too excited to eat so I didn’t eat much. After the early recess, we hopped on the bus. I sat next to Indiana and we talked a lot. The bus ride took about half an hour but it felt like an hour.  (Luana)

When we arrived at Garden City Shopping Centre, we headed straight to the Apple Store. We all sat down in the shop front, behind one of the glass windows to discuss with our group and decide which Dreamtime story we should make into an iMovie. Then, the Creative Pro people, both named Rachael, showed us how to make an iMovie. Each group got an iPad so we could start making our iMovie. (Matilda)

The people in my group were Ehsan, Cooper, Lucas, Ano and I. Both the ladies kept coming to my group to say that we had very creative ideas. (Eva) In our movies, we pretended to be animals from our Dreamtime stories. After we finished filming, we started editing. We also added sound effects and emojis.  (Milli) Amazingly, everyone’s iMovie turned out to be phenomenal!  (Eva) In the end, Rachael handed out the certificates to all of us. They were so cool! (Willow)

After taking a few group photos, we took a long but relaxing bush walk to the Wireless Hill Park. (Emily) During the walk, we saw a small blue tongue lizard. (Moesat) Finally, we sat down to have lunch. I was so hungry that I could eat my arm! (Willow) After lunch, my friends and I raced to the Wireless Hill War Memorial. (Emily) The panoramic picture, formed by the panels of photos of the soldiers going to war, was so fascinating.  Meanwhile, some of us were having a nice, long play at the playground. Others were climbing trees and having a chat.  (Mrs Uden) I was playing on the swing for a long time. When I was on the swing, it felt like I was going to sleep. I was in that relaxed pose when my teacher took pictures of me.  (Brayden) I had a jolly good time. (Lachlan)

Unexpectedly, a lady named Heather, from the Wireless Hill Museum invited us to the exhibition. (Eva) It was called the “Picture Palaces of Perth”. (Matilda) Heather talked to us about how people in the olden days made and watched movies. (Saxon) Then, we went on a scavenger hunt of the things at the exhibition using photos printed on paper. My partner and I found everything. (Chad) I had lots and lots of fun there. (Sahana) My legs felt like they were going to fall off. (Saxon)

Sadly, it was time to go. I was sad but I got over it. (Milli) We had another class photo and went on the bus. (Emily) Altogether, my teacher took 113 photos. I had the most wonderful day!! (Willow) 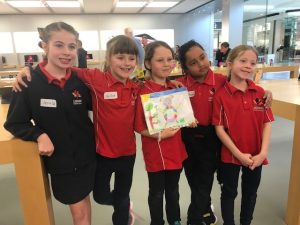 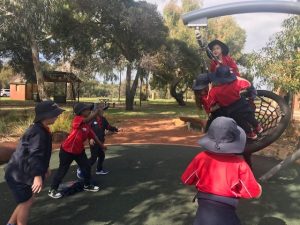 During week 1 of this term I organised for a representative, Alison Moore from Little Athletics Australia to come down to Leeming Primary and take all the sport classes from Pre-Primary to Year 6 for some Athletics clinics in preparation for our school Athletics carnival in week 10 this term. The clinics ranged in each year level, but the primary focus for each lesson was on the Long Jump and Sprints. The younger students got to really nail down the jumping off of one foot and landing on two feet in the sand pit as it is a very tricky concept at a young age. The older students got to experience a different style of clinic focusing on the strength of each muscle required to sprint and jump. These included the use of medicine balls, hurdles and other students as partner workouts.

The feedback from Alison Moore was fantastic, stating all the kids were amazing with behaviour and a few spotted as upcoming athletes. I quote she said “These Pre-Primary students are the best I’ve ever had”.

The students as always loved having an expert out to challenge them this time through Athletics. 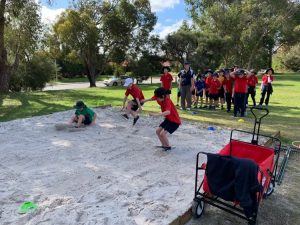 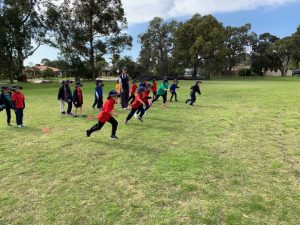 On July 31st, 2019, a group of high school students from Japan came to visit and do activities with Leeming Primary students. Our students practised their Japanese language skills and learned how to play with kendama (traditional cup and ball game), kamifusen (thin paper balloons), origami, and ohajiki (flat marble game).

‘I really liked the kendama because it was a good toy for practising co-ordination.’  – Rohan (Room 9)

‘I liked the origami because it’s a really good way to get more patience and creativity.’ – Evan (Room 9)

‘I liked the ohajiki game because it was fun. I really liked practising my Japanese with the Japanese students.’ – Sienna (Room 9)

Many thanks to Leeming Senior High School for bringing their visiting Japanese students to visit us! 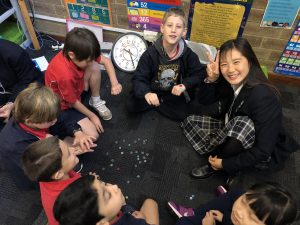 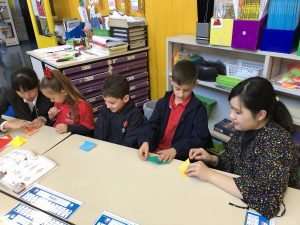 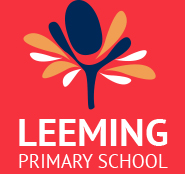